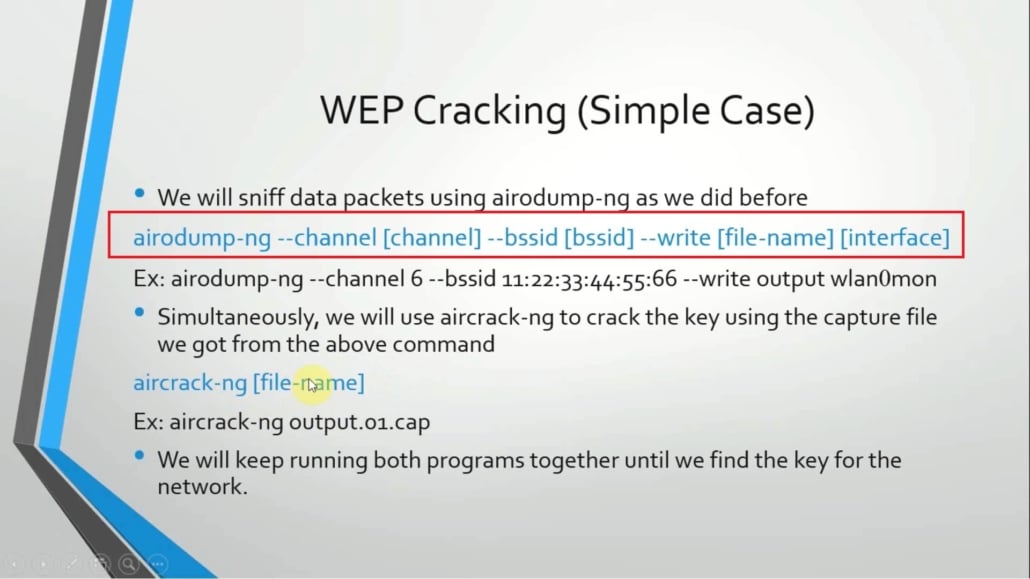 We set up WEP in our lab and successfully cracked the WEP key. In order to do this, we first waited for a legitimate client of the network to connect to the access point. After this, we used the aireplay-ng tool to replay ARP packets into the network. This caused the network to send ARP replay packets, thus greatly increasing the number of data packets sent over the air. We then used the aircrack-ng tool to crack the WEP key by analyzing cryptographic weaknesses in these data packets.

See also: How to View your Pending Friend Requests on Facebook Timeline [Updated]

Wifiphisher is a security tool that mounts the fast automated phishing attacks which are against WPA networks so as order to acquire all the secret passphrase of the particular Wi-Fi network. Unlike other methods of hacking, Wifiphisher is a type of social engineering attack that does not include brute forcing. It is very easy way to obtain WPA credentials of the users whom you wish to hack. Wifiphisher works on a platform that supports Kali Linux Operating System and is licensed under the MIT license.

Wifiphisher is a tool that is used to hack a Wi-FI network and this attack makes use of three phases:

See also: What Do the Red Stars Mean on Netflix? 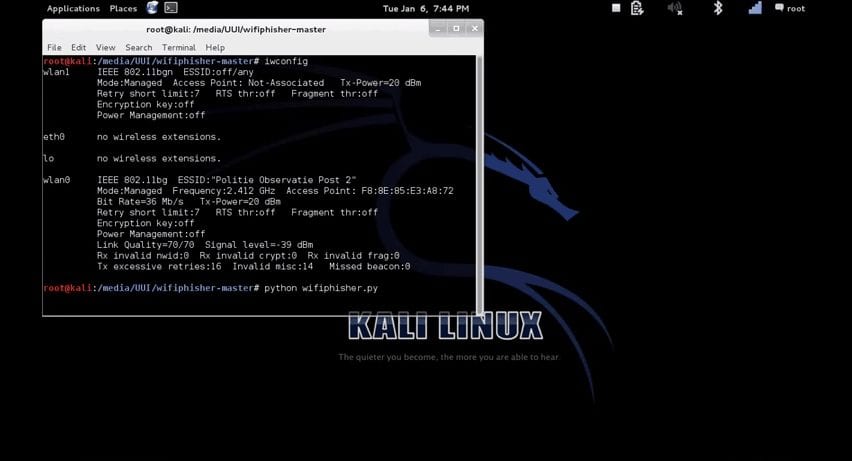 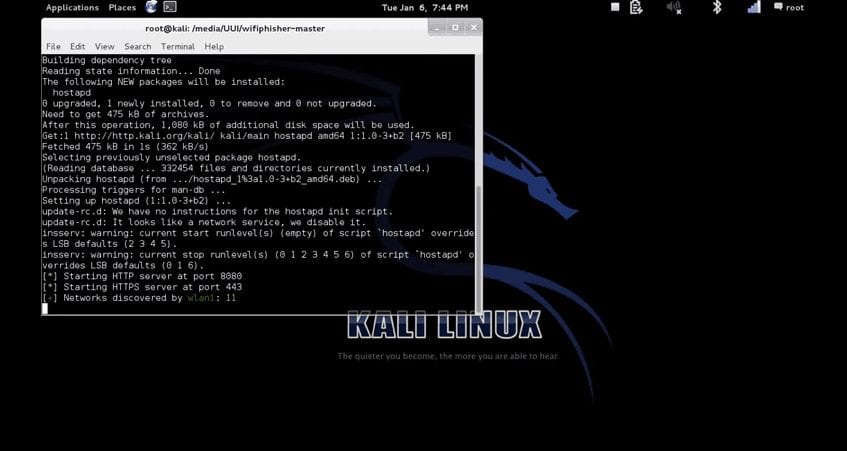 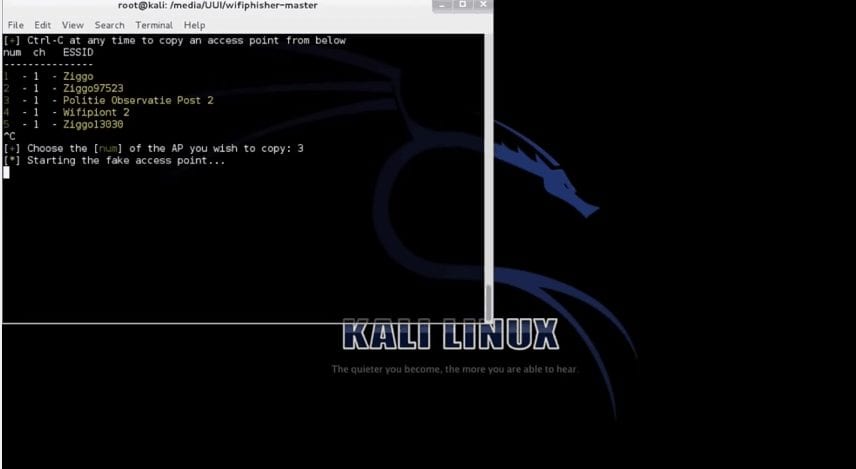 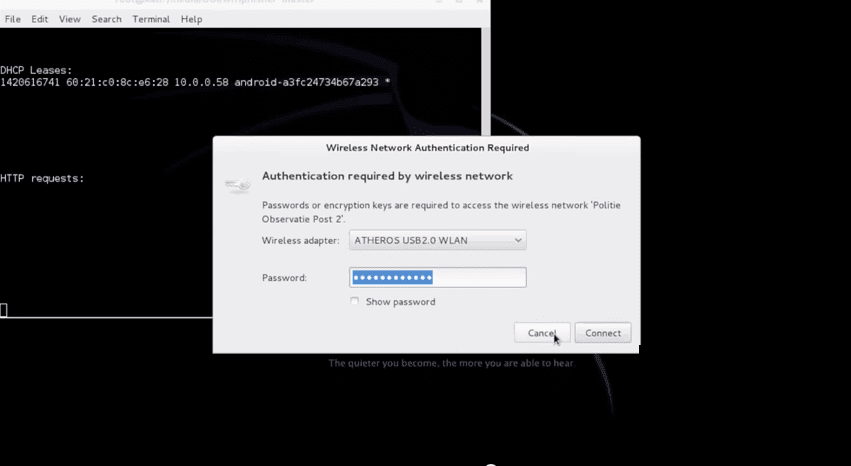 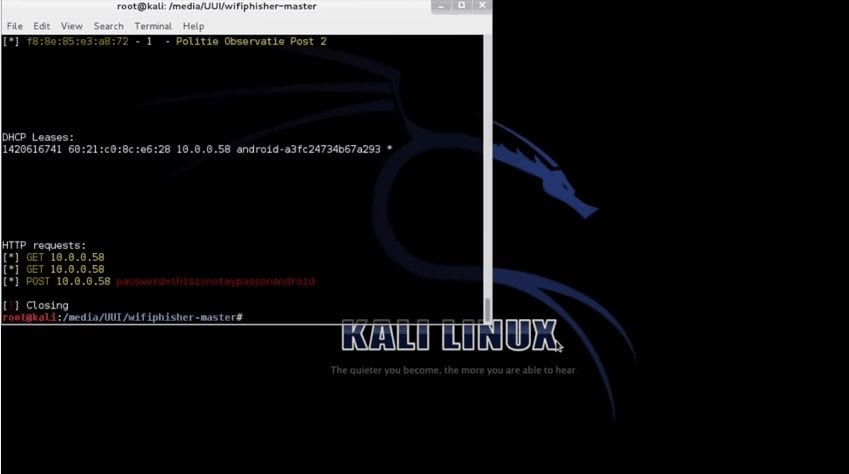 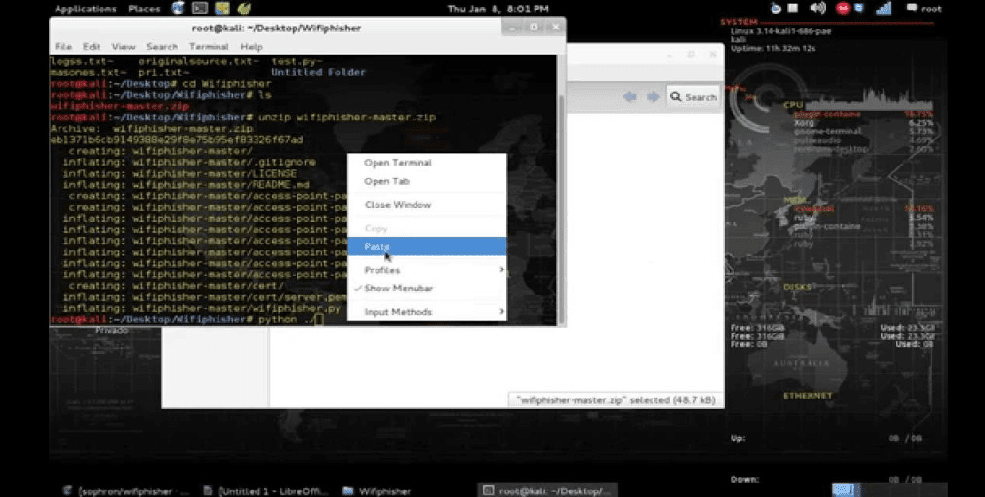 Till now you have seen two techniques to hack Wi-Fi WEP, WPA/WPA2 Security using Wifite and WIFIPHISHER. By using these two server attacks, you can easily crack the Wi-Fi network.

Tools You Will Need

If you’ve already have sample capture (in a Wireshark readable format) the only thing you’ll need to install is Wireshark and Aircrack-ng. Again I’m on macOS have have Homebrew installed so installed Wireshark in terminal using the command

and for Aircrack-ng ran the command

As mentioned above, for this attack you’ll need a device running Kali Linux. The steps for putting your wireless card in monitoring mode are slightly different between Kali 1 and Kali 2.

See also: The 10 Best Electric Heated Blankets in 2022 for Elderly

Sheep Connects to the Network

Before or while you are monitoring the network, you will have a new node connect to the network – the third party you’re connecting. Suppose it’s a hapless sheep streaming Pandora. The sheep joins the WEP network, and packet traffic begins.

A little theory first. WEP is a really crappy and old encryption techinque to secure a wireless connection. A 3-byte vector, called an Initalization Vector or IV, is prepended onto packets and its based on a pre-shared key that all the authenticated clients know… think of it as the network key you need to authenticate.

Well if its on (almost) every packet generated by the client or AP, then if we collect enough of them, like a few hundred thousand, we should be able to dramatically reduce the keyspace to check and brute force becomes a realistic proposition.

A couple of things will cause us some problems.

Setting up your tools

For a standard WEP hack we’ll usally only need airodump, aircrack, and kismet (server and client). If we run into some problems we might have to use airreplay to fiddle about.

I’ll leave you to config all these tools up, for the most part they should just be defaults with the exception of kismet.

First step is we need to find a netork to crack. Start up kismet and start sniffing for APs. Leave it on for a bit so that it can discover all the important information about the networks around. What we want from kismet is:

All this info isn’t required but the more you have, the more options you have later to crack and sniff. We can get a lot of this from airodump as well but I find the channel is important.

Alright, we know what we wanna crack, so lets start capturing packets. You can use kismet to capture files but I prefer airodump because it keeps a running count of all the IVs I’ve captured and I can crack and airodump will automatically update aircrack with new IVs as it finds them.

Note: kimset can interfere with airodump so make sure you close it down before starting airodump.

Airodump is pretty straight forward with its command line looking something like this:

My wireless card is ath0, output prefix i’ll use “lucid”, the channel we sniffed from kismet is 6, and IVs flag is 1 because we just want IVs. So we run:

Airodump will come up with a graph showing us all the APs and their relevant info, as well as client stations connected to any of the APs.

The second line shows us some info about the AP as well as the number of beacons and data packets we’ve collected from the AP. The two last lines show us two authenticated clients. Where they are connected to and the packets they are sending. We won’t use this client info in a straight theory hack but in practice we’ll need this info to actively attack the AP.

This step may take a long time or could be very short. It depends how busy the AP is and how many IVs we are collecting. What we are doing is populating a file “lucid.ivs” with all the IV important packet info. Next, we’ll feed this to aircrack. To move onto the next step, we’ll want at least 100,000 packets (under # Data in airodump) but probably more.

Using IVs to Decrypt the Key

Ok, pretend you have enough IVs now to attempt a crack. Goto a new terminal (without stopping airodump – remember it’ll autoupdate as new IVs are found) and we’ll start aircrack. It looks something like this:

There are a lot of options so you can look them up yourself, i’ll be using common ones here that should get you a crack. Our input file is “lucid.ivs”, the options we will use are:

and off it goes, resembling the picture from the top. Keep an eye on the Unique IV count as it should increase if airodump is still running. For all intents and purposes you are done. That’ll pop open most old wireless routers with some traffic on them.

There are lots of problems that can come up that will make the above fail, or work very slowly.

This will show how easy it is to attack a WEP protected network. They key length does not matter and it can be done using regular customer-grade equipment.

The goal for this exercise is to gather initialization vectors (IVs) for cracking the key. A data packet always has a corresponding IV attached to it. By passively listening to a network it’s to gather the IVs neccessary, but it will take a lot of time. Instead, by re-injecting packets the AP is forced to resend selected packets, generating lots of traffic and IVs in a short time. For details see Simple WEP Crack on the aircrack-ng.com website.

I chose to use a Alfa AWUS036H adapter, based on the RealTek RTL8187 chipset. It’s USB powered, has a 500 mW amplifier, and RP-SMA antenna connector. The high power will allow for stronger signal and longer range, but also picking up more noise. 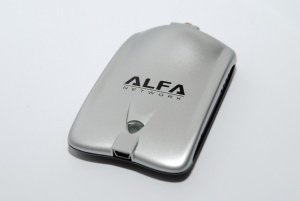 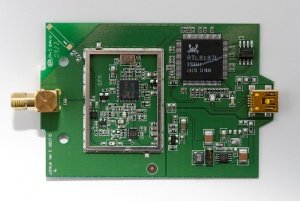 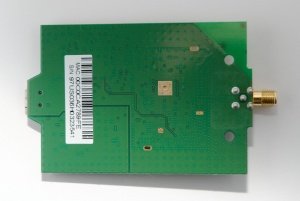 Change the MAC address and set the adapter in monitor mode. The drive has to support the ability to transmit and receive raw frames (monitor mode).

Find the network you want to pen-test (use your own network as a test platform) using either Kismet or airodump. I’ll use the latter one here. Airomon-ng will start in interactive mode and start channel hopping (1-14).

Look for networks using WEP encryption under the ENC moniker. The PWR level should be above 4-5 to get a working connection.

Make a note of the BSSID and Channel (ctrl+c to exit and then mark the text). In Linux use shift+insert to paste the clipboard content. Here I’ll concentrate on the network ESSID dlink, on channel 3, BSSID 00:24:01:34:0E:23.

Quit the process when the details have been noted. To verify the power levels, use the following command to perform a ping test. It should return 30/30 or close to it.

Next, start the capture process to run in the background. It will capture all encrypted traffic going across the specific Access Point and save it to (filename).cap for later reference. The content will be used to filter out the IVs and cracking the key using aircrack-ng (PTW method).

Now, open another new terminal to perform a fake authentication. For injection to work the MAC address of the source has to be associated with the AP, else the packets are discarded by the AP.

This command will associate the MAC address of the adapter with the AP and allow further aireplay-ng attacks. Fake authentication will only work when MAC filtering is not enforced by the AP.

For this step, open a new terminal window. This is the part where traffic is generated (stimulated) by injecting ARP packets back into the network. Once an ARP packet created by the AP it will be captured by aireplay-ng and re-injected into the network. The AP will normally rebroadcast them and then with a different IV. The rate of injection is in the range of 250-500 packets per second, depending on the signal/distance to the AP.

It can take little while before an ARP packet is created on the network. Alternatively try the –interactive mode if there are client(s) connected and look for any broadcast packets (FF:FF:FF..) or packets originating from one of the Clients, and where the destination is the AP. Try a few packets until the data packet count starts to increase rapidly.

Alternatively use ‘-3’ instead of ‘–arpreplay’ for short.

When a new ARP request is captured, aireplay will begin re-injecting the frame into the network. The numbers should start to rapidly build up, 500 packets/s max (default). After 20-30 000 read ARP packets, it’s safe to cancel the replay. Hopefully enough IVs has been captured to begin deciphering the key.

If the ARP re-injection attack didn’t work, try this.

It’s interesting how the key is cracked. The frame is first reversed XOR’ed to reveal a small part of the RC4 stream cipher, a table is build of IVs and stream ciphers, statistical and algorithmic methods (PTW methodology, -z parameter) are used to predict the missing RC4 bytes to further decipher the key using the public IVs. The PTW method only works on captured ARP request packets, use another aircrack-ng mode for other kind of traffic.

This process can also run in parallel to the aireplay to crack the key in pseudo real-time. In this instance it was a 40-bit key, relatively little time to crack (near instantly).