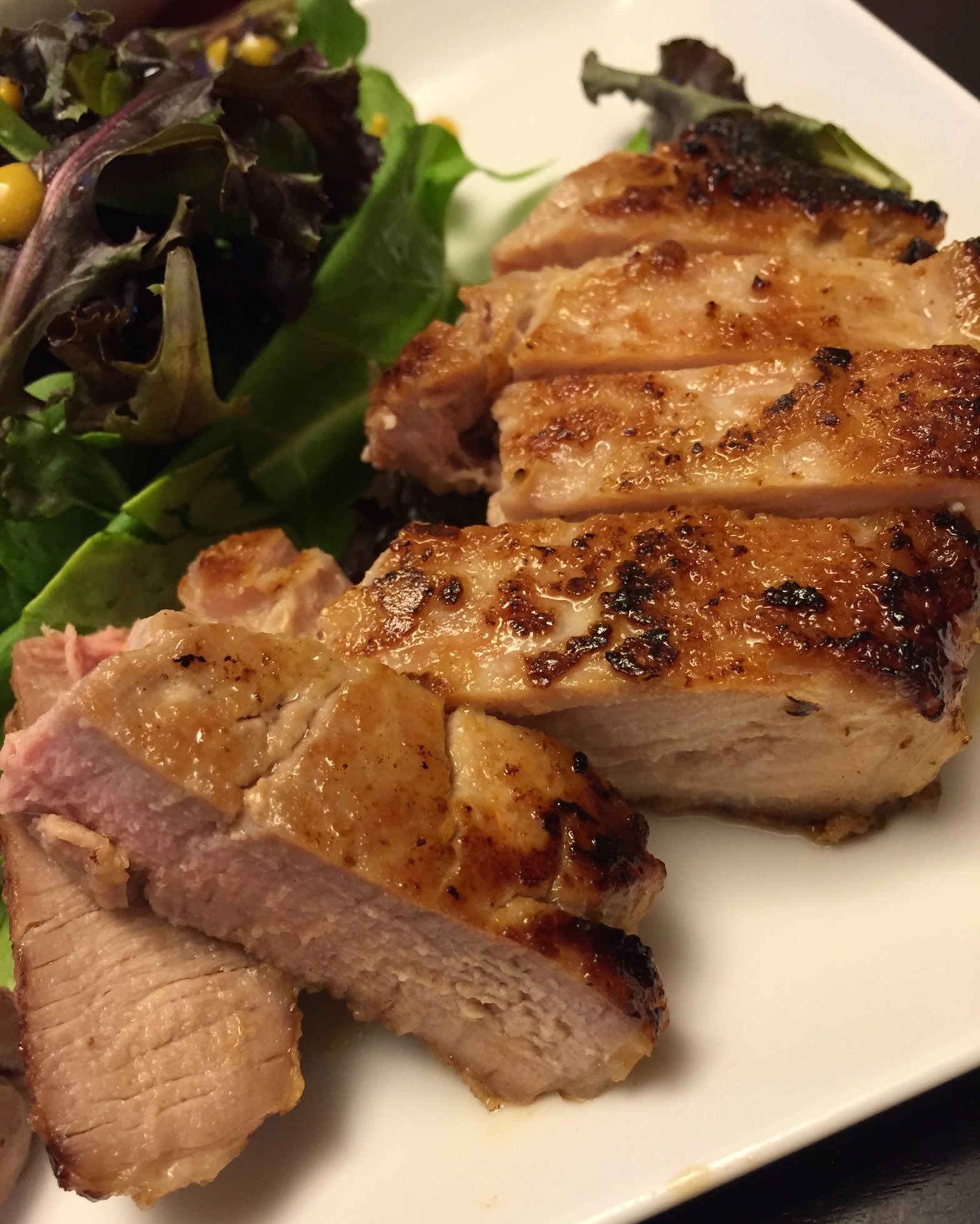 What is Shio Kōji

Shio Kōji (photo below) is made by fermenting rice grain kōji with salt and water for 7-10 days at room temperature. During the fermentation process, starches from the rice are converted into sugar, which gives Shio Kōji a slightly sweet and salty flavour. 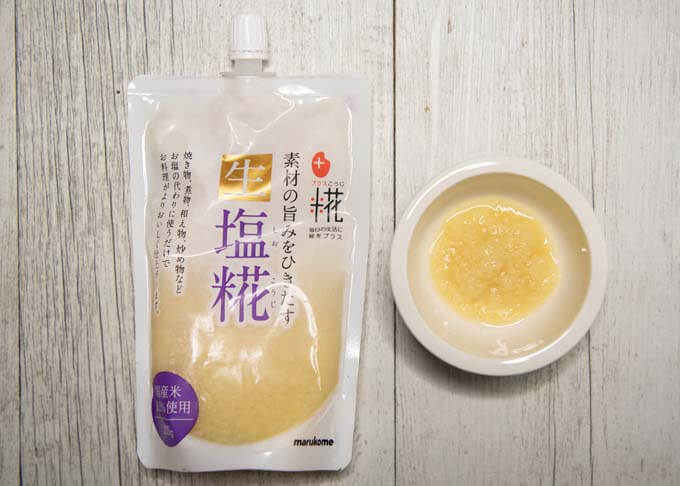 Kōji  is a food made by putting koji mould (Aspergillus oryzae) called ‘nihon kōji kabi‘ (ニホンコウジカビ) on steamed rice, barley, or soy beans. It is then cultured at a particular temperature and humidity. Each type of kōji retains the original shape of the grain but you can see the hairy mould around the grains.

Because this mould is used widely in Japan to produce many Japanese seasonings and sake, nihon kōji kabi was certified as the ‘National Mould’ by the Brewing Society of Japan in 2006. It’s very rare for a mould to get such an honour. 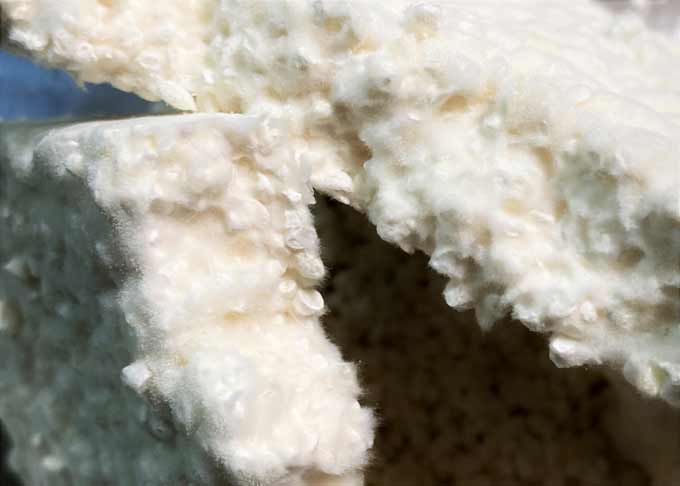 When you marinate meat or fish (or even vegetables) in Shio Kōji, starches and protein are broken down, producing sugar and amino acid, which makes the ingredients full of umami. It also tenderises meat.

See also: Why it's so hard to find clothing that's ethically made 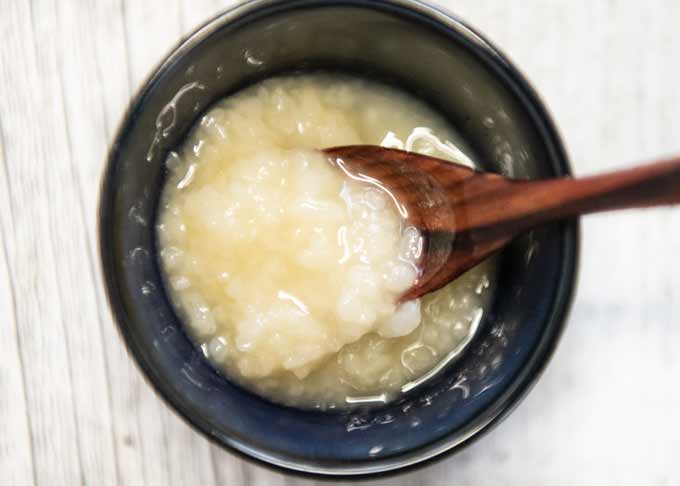 Shio Kōji can keep in the fridge for a month. You can also freeze it for 6 months (it never hardens even when frozen).

You can buy Shio Kōji in a bag at Japanese grocery stores or online shops such as eBay and Amazon. There is also a liquid-form of Shio Kōji. You can use it in the same way as the paste-form.

You can make Shio Kōji at home, but I’d rather buy it. To make Shio Kōji, you will need koji, which is even harder to find at Japanese/Asian grocery stores than Shio Kōji.

How to use Shio Koji

We can use Shio Koji to marinate meat, fish, to make pickled vegetables and dressing. It can be used just as a salt substitute. It is recommended to use twice as much as using salt alone. For pickling, about 10% of the weight of the pickled ingredients is appropriate.

Apply Shio Koji to cut vegetables such as cucumber, Daikon radish, eggplants or cabbage, and rub them. Leave it in a cool place for hours and serve it.

After pickling vegetables, the leftover juice can be used for making salad dressing or seasoning sauce.

The longer the marinating time is, the saltier the food becomes. Food with Shio Koji is very easy to get burnt. I recommend you stay with the food while cooking.

When you use a frying pan, you may have too much moisture coming from the meat. It is better to remove the moisture from the meat just before you cook it. I also recommend using aluminium foil or oven paper to easily clean the frying pan after cooking.

Food with Shio Koji is very easy to get burnt. I recommend you stay with the food while cooking.

What is Rice Koji (米こうじ/米糀/米麹)?

Rice Koji (米こうじ/米糀/米麹) is steamed rice that has been treated with Koji mould. Koji is an important part of Japan’s food that has been cultured over the centuries.

See also: Shatter A Car Window With A Sparkplug In An Emergency

What is the difference between mould and yeat?

Both molds and yeast belong to the kingdom of Fungus, and are Eukaryotes.

Molds are microorganisms which have a tendency to grow with help of multiple celled filaments called as hyphae, whereas yeast is a microscopic form of fungi having just a one cell.

“Shio-koji” is one of the fermented seasonings, “Shio” means “Salt” in Japanese, as the name implies, it is a seasoning made from salt and koji.There are many seasonings made from koji, such as miso and soy sauce. So Koji-Rice is the koji made of rice.

In 2011, the “Shio-koji fad” occurred in Japan, and there have been many cooking recipes of Shio Koji produced since then.

Shio-koji is a mixture of salt and koji, it is salty, but there are the umami and sweet tastes produced by fermentation.Therefore, it can be substituted salt or soy sauce to reduce salt for cooking, bring out the umami of food, and can be used as a sauce. It is a versatile seasoning.

How to Use Shio Koji

So you've made a batch of shio koji, and it's now sitting in the back of your fridge waiting for you to unleash its potential. So how should you go about using it? First and foremost, it's one of the easiest and most effective marinades around. But shio koji has other uses as well! Add it to sauces, dressings, baked goods, lacto-fermented vegetables, and more! Here are some of our favorite uses for shio koji, which I will continue to add to as we experiment more and more with it in the test kitchen.

Marinade for Poultry, Meat, and Fish

The most common use for shio koji is as a marinade or cure for poultry, meat, seafood, and even vegetables. For proteins, slather them up with shio koji and let them hang out for as little as 30 minutes and up to 24 hours, depending on the size and type of ingredient you are working with. Generally speaking, the larger the piece of food, the longer you should marinate it. Over time, shio koji will begin to cure the ingredient it's in contact with, so delicate foods, like fish, should be marinated for a shorter amount of time.

You can decide whether to leave the texture of the shio koji as-is, in its porridge-like state, or buzz it up with a blender to make a smooth, creamy marinade. It will be effective either way. I usually blend it when I am looking to get a smooth, burnished surface on the end product (I have a recipe for koji roast duck dropping soon), and leave it coarse when marinating something that will have a crust-like exterior (such as a beef roast).

When you're ready to cook, wipe off excess shio koji from the surface of your food to prevent it from scorching and then cook as you normally would, although you do have to keep an eye on things since koji-treated ingredients do take on color much faster (as is the case with most marinades that usually contain some form of sugar).

Individual fish fillets, scallops, and shrimp can be marinated for as little as 30 minutes with shio koji, which will firm them up, keep them succulent, and season them with a perfect balance of savory and sweet flavor.

Steaks, chops, chicken breasts, and the like should be marinated for at least an hour and up to a few hours.

Larger cuts, especially bone-in pieces of meat or poultry, are best marinated overnight (at least 12 hours), giving the protease enzymes time to do their magic, breaking down proteins and seasoning the meat. Treat large roasts as if you are dry-brining them: set them on a wire rack-lined baking sheet after slathering them with shio koji. As with regular kosher salt, the salinity in shio koji will work its way into the meat and dry out the surface of the roast at the same time.

For smaller items that you aren't searing or roasting (like the koji duck confit recipe that I will be publishing soon), you can marinate them in sealed zipper-lock bags.

Shio koji can also be used to bump up the flavor of sauces and dressings. Add savory depth to a gravy or jus by stirring in a little blended shio koji. Try it in salad dressings—koji Caesar salad is killer, I promise you—or whisked into your favorite pan sauce. Shio koji has a can’t-quite-put-your-finger-on-it magic flavor that toes the line between savory and sweet in the best way, and there is so much room for exploration with it. So go make yourself a batch, and start koji-cooking!